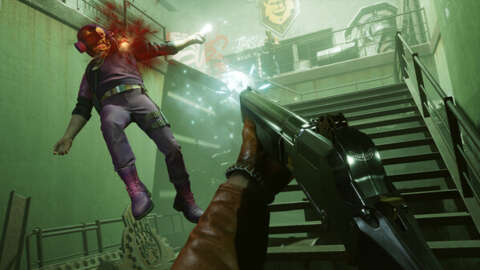 A new update for Deathloop, the game’s second major patch since launch, is out now. In terms of new features, the update adds controller remapping and an inverting option for the right and left stick.

On PS5, there are new field-of-view and motion-blur options, while UI buttons and text in menus are now larger to help address accessibility concerns.

The November 18 patch also makes changes to NPC behavior in a number of ways. NPCs will now react more appropriately to bullets that narrowly miss them, while they will also react more realistically when one of their NPC friends is assassinated nearby. What’s more, NPCs are getting smarter and can now hear better and react faster to your movements, while NPCs can also now determine the direction of an incoming grenade and react accordingly.

The new Deathloop patch also fixes a series of bugs, including visual glitches and a problem that could make closed doors look as if they were open. You can see the full patch notes below, as shared by Bethesda.

GameSpot’s Deathloop review scored the game a 10/10, becoming just the 20th game in GameSpot’s history to be awarded a 10.

“Perhaps the most laudable part of Deathloop is how it takes so many seemingly disparate things and creates harmony between them,” reviewer Tamoor Hussain said. “Gameplay systems that feel isolated become pieces of a bigger puzzle, and when you see how they seamlessly connect together, you realize how special an achievement it really is.”

For more, check out GameSpot’s extended coverage of Deathloop, including our Deathloop beginner’s guide that covers 10 essential tips you need to know. Deathloop leads The Game Awards with nine total nominations, including Game of the Year.

Deathloop Is More Than 50% Off For Black Friday

Deathloop’s Most Annoying Visionary Hasn’t Died The Most