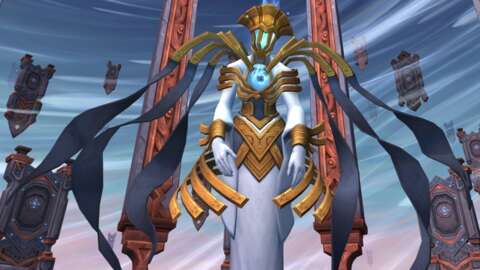 World of Warcraft’s Shadowlands expansion will culminate in the upcoming patch 9.2, where players will take on the Jailer as he seeks to put an end to all creation. Blizzard has described 9.2 as the final chapter of this particular book of the Warcraft saga, and as such it looks like the developer will be trying to tie up more than a few loose ends.

One of those loose ends includes who is to become the Arbiter, the deity-like being responsible for sorting the various souls that flow into the different afterlives of the Shadowlands. If recent datamining is to be believed, the answer is catching more than a few players off guard.

Potential Spoilers For Shadowlands Patch 9.2 Ahead

According to datamined dialogue and NPCs from the patch 9.2 public-test-realm via Wowhead, the minor NPC Pelagos will step up to become the Arbiter just before players journey into the Sepulcher of the First Ones raid to confront the Jailer. Datamined dialogue shows Pelagos talking about directing souls and about having found his path. His companion, Kleia, is shocked at this news.

Several datamined NPC IDs also mention “Arbiter Pelagos.” Although Arbiter Pelagos currently has no models or textures in this build of the PTR, that is likely because Blizzard is hiding the model to avoid spoilers. There’s always a chance some of the datamined information is misdirection on Blizzard’s part, but it certainly seems like Pelagos will indeed become the Arbiter.

So who is Pelagos? That’s the question more than a few WoW players are asking. He’s a minor character that largely only appears in the Kyrian Covenant storyline, meaning many players who opted for one of the game’s other three Covenants have hardly ever interacted with the character outside a few brief moments while leveling the Kyrian zone of Bastion at the outset of the expansion. He is also a soulbind character for players who choose the Kyrian Covenant, meaning he essentially serves as an additional talent tree for players to invest points into.

His sudden promotion to the supreme being of the Shadowlands has more than a few players on the game’s subreddit comparing Pelagos becoming the Arbiter to (SPOILERS) Bran becoming the King of Westeros in the widely panned finale of Game of Thrones.

Patch 9.2 does not currently have a release date. When the patch does arrive, it will bring with it the return of class-based Tier sets, a new zone, raid, and more. The patch will release as Blizzard continues to deal with the fallout from multiple lawsuits and investigations related to allegations of sexual harassment and discrimination at Activision Blizzard.