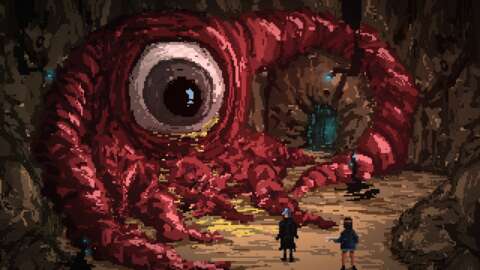 Death Trash will launch in Steam Early Access on August 5. The creepy-looking action-RPG is set to fully release for Steam, itch.io, GOG, and the Epic Games Store at a future date.

Developed by Crafting Legends, Death Trash is set in a post-apocalyptic world, called Nexus, inhabited by these gross cosmic flesh titans. As an action RPG, the game features both open combat and stealth sections and includes choice-driven dialogue.

Of note: Any character in Death Trash can be killed, even the important ones. Whether you should is up to you–considering how tough the combat looks, attacking random people doesn’t seem like the smartest means of solving all your problems. But the option is there for you if you want it.

Death Trash also features drop-in, drop-out co-op so you can take on its disturbing world with a friend. The entire campaign supports co-op.

In Death Trash, you play as someone who’s been outcast from one of the enclosed habitats on Nexus, forcing you to now explore the many deserts, ruins, and underground tunnels that dot the wasteland. Along the way, you’ll encounter other outcasts and cosmic horrors.