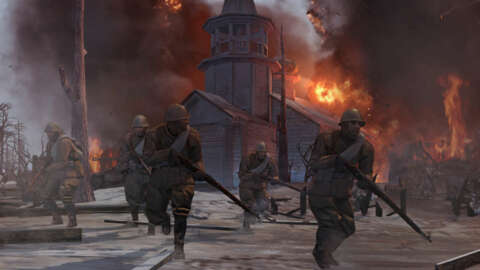 After a 24-hour countdown on its official Twitch channel, developer Relic Entertainment has unveiled Company of Heroes 3 through an IGN livestream reveal. The new entry in the long-running WWII real-time strategy franchise will launch on PC sometime in late 2022.

Relic Entertainment dropped a gameplay trailer showcasing the new combat mechanics, including a feature that lets players pause the action in single-player called Tactical Pause. A little like Final Fantasy’s Active Time Battle system, Company of Heroes 3’s Tactical Pause freezes the game so players can make precise battle decisions and movements. But it’s only available in single-player. There are other additions as well, which are briefly outlined in the gameplay trailer below.

Players interested in checking out Company of Heroes 3 before launch can sign up for a free pre-alpha preview on PC by joining the co-development program, where Relic Entertainment will share design documents and give access to in-development elements like the Tactical Pause feature. The preview is now live and will be playable for three weeks. Check out some official screenshots below.

Relic Entertainment teased Company of Heroes 3 with a 24-hour countdown on Twitch, which featured what appeared to be old newsreel footage of the Italian front of World War II. While the studio was teasing the game, the official Company of Heroes website was down for maintenance. However, the site has since bounced back with Company of Heroes 3 emblazoned all over it.

How To Watch Netflix On Nintendo Switch