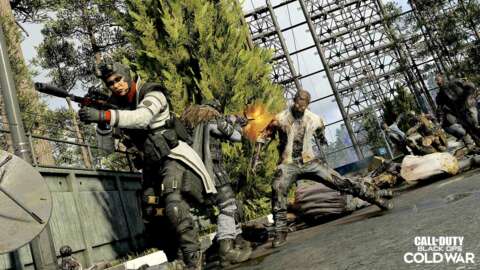 Leakers have released an eight-minute video showing off what appears to be an unreleased Call of Duty battle royale map from Treyarch. The video was tweeted out by the group of Call of Duty leakers known as the Cheezeburgerboyz, and the footage gives a full tour of the previously leaked Ural Mountains map that was said to be designed for either a follow up to Black Ops 4’s Blackout or a new Warzone map. We’ve had partial map images and images leak prior to Black Ops Cold War’s integration into Warzone, but this is the first full video to surface.

The video shows a player running across the map, and they periodically show the overhead view of the full Ural Mountains map. The footage shows perks and ground loot scavenging that is very similar to how it worked in Blackout.

Some of the points of interest shown in the video are also pretty familiar, as they are the Ural Mountains-based maps currently found in Black Ops Cold War’s Fireteam multiplayer playlist, and the same maps are also used for the Zombies Outbreak mode. In addition to those familiar locales, we also see new areas like Zoo and Mines, which haven’t arrived in Cold War, but they could be maps we see in future seasons.

We might never see this massive Ural Mountains map as a playable battle royale map in Call of Duty, but I’d be excited to see more of the locations arrive in Outbreak. Maybe we’ll see one as early as Call of Duty’s Season 4, which is set to get a world reveal on Thursday June 10 during Geoff Keighley’s Summer Game Fest.