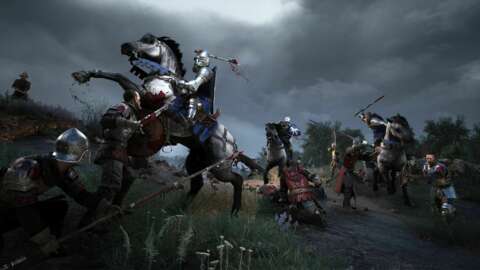 The cross-play open beta for Chivalry 2 is set to go live on Thursday, May 27 for PC, PS4, PS5, Xbox One, and Xbox Series X. Developer Torn Banner Studios confirmed that preloading is now available on all platforms.

Chivalry 2’s open beta is free for everyone to download. Xbox players will need an active Xbox Live Gold membership to play. A PS Plus subscription is not required for those on PlayStation consoles. The open beta is scheduled to run from May 27 to June 1 before Chivalry 2’s June 8 launch.

The open beta will feature new content such as maps like The Slaughter of Coxwell, a brutal siege of a peaceful Coxwell village requiring players to burn and pillage it. Four other maps are also added.

Elsewhere, the open beta offers a free-for-all mode, full access to character customization, duel servers on PC, and player-count options for 40 and 64. Finally, a new feature allows players on the same platform to group up before joining a cross-play match.