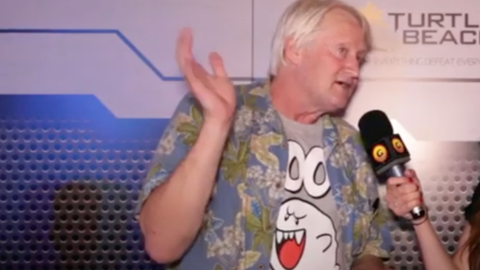 Voice actor Charles Martinet has been voicing Mario since the ’90s, and he doesn’t plan to stop soon. Martinet, who is 66, said at an appearance at FAN EXPO Canada: Limited Edition that he plans to voice Mario “until I drop dead.”

According to The Game Crater, Martinet told the audience, “I want to voice Mario until I drop dead.” That being said, Martinet acknowledged that, “If someday I think I am no longer capable of doing it, I will tell Nintendo to look into finding someone else.”

Martinet, who also voices Luigi and Wario, went on to say that he hopes the Mario franchise will live on after him. “I hope there will still be Mario after I am gone. Anyways, there are over 5 million audio files of me voicing Mario. I go into the studio and record 45 takes of every sound I can think of, so I’m not going anywhere for a long time!” he said.

Martinet will not voice Mario in the upcoming Mario movie, as the role has gone to Chris Pratt, but Martinet will do some “surprise cameos” in the film. The rest of the cast includes Anya Taylor-Joy as Princess Peach, Charlie Day as Luigi, Jack Black as Bowser, Seth Rogen as Donkey Kong, and Keegan-Michael Key as Toad.

The film–which was announced many years ago–will debut on December 21, 2022 in the US, with release dates for other parts of the world to be announced later.