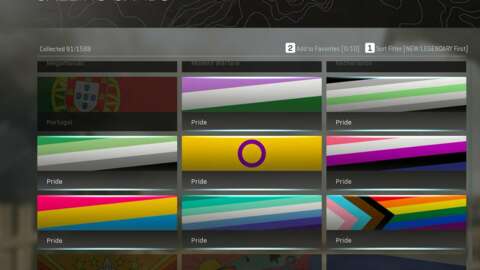 Warzone is the latest game to get new Pride month-related content, with eight new Pride flags being added as Calling Cards. The new flags join six other Pride flags that were added as part of last year’s celebration, bringing the total to 14 flags representing varied LGBTQIA+ identities.

The newly added flags include designs representing the genderqueer, agender, aromantic, intersex, genderfluid, and pansexual communities. The new flags also include one specific to gay men, as well as the Progress Pride flag, which combines the rainbow Pride flag with the colors of the trans Pride flag.

The Calling Cards will go live with this weeks #Warzone update on Wednesday evening. They will be added to player’s inventories by default and are completely free for everyone. pic.twitter.com/mBpVgflJRm

Unfortunately the Pride rollout isn’t quite global–as reported by Game Rant, the flags aren’t available in some Middle Eastern countries. A screenshot posted to Reddit shows how Raven Software has censored the Calling Cards for countries where LGBTQIA+ content is illegal. The list still shows a handful of cards labelled “Pride,” but the graphics have been replaced with placeholder images and the cards are not selectable.

For all other countries, the new Calling Cards were added as part of the game’s most recent update, and have been automatically added to all players’ inventories for free.