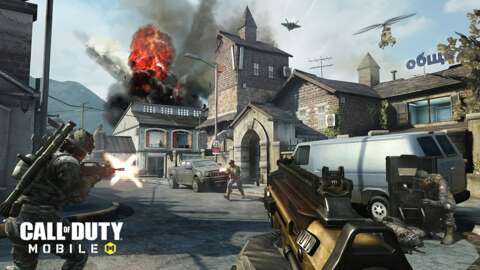 The three new maps are Suldal Harbor, Docks, and Aniyah Incursion. Suldal Harbor is a close-quarters map based on a shipping port that supports 5v5 and 10v10 game modes, while Docks is modeled after a Thames shipyard and built for the Gunfight mode. Finally, Aniyah Incursion might be familiar to Call of Duty fans, as it first appeared in Call of Duty: Modern Warfare. It supports 10v10, Ground Mission, and Attack of the Undead modes.

Season 5 also brings with it a couple of new multiplayer modes. The aforementioned Ground Mission is a scaled-up version of the classic Domination mode, with 10v10 combat and five capture points on each map. Cranked: Confirmed, meanwhile, is a combination of series mainstays Cranked and Kill Confirmed.

Finally, the themed seasonal event is called Sea of Steel and tasks players to take sides in a meta-competition. The Ghosts and the Federation will compete to capture territory by completing daily challenges

As with every new season, there’s also a refreshed battle pass with free and paid tiers. Earning the free tiers will get you items like a new skill that lets you summon a dog companion as well as the CR-56 AMAX assault rifle. The premium tiers are headlined by the four new playable characters coming in Season 5. These are Roze – Foreshadow, Rorke – Man Hunter, Merrick, and Otter – Backstroke. Merrick and Rorke both first appeared in Call of Duty: Ghosts, while Otter is a soldier whose appearance is all about subnautical combat.

In Deep Water will be available starting at 5 PM PT/8 PM ET/10 PM BST. You can see the full list of content, as shared in the season’s announcement, below.

Earn New Rewards for the In Deep Water Battle Pass

Summon a trained companion with the new K9 Unit Operator Skill unlocked at Tier 14. Expand your arsenal with the new CR-56 AMAX functional weapon at Tier 21. Other free Tier items include the Kilo Bolt-Action – Warship, the Combat Axe – Lighthouse, and more.

Purchase the Battle Pass for the chance to earn all of the content available in the In Deep Water stream. Get Merrick and Rorke – Man Hunter from Call of Duty: Ghosts, as well as Otter – Backstroke and Roze – Foreshadow. Intimidate your enemies with new Weapon Blueprints like the Ghost-themed BK57–Counter Stealth Unit, the QXR – Close Catch, the DR-H – Rebreather, CR-56 AMAX, and the PP19 Bizon – Devilfish.

Docks: Deploy to a shipyard on the River Thames in this symmetrical small-sized map with plenty of vertical play. Will you fight in the open or rush inside? Supported in Gunfight.

Aniyah Incursion: A bombed-out palace looms over the landscape surrounded by military supplies and housing. Fight in the luxurious palace interior or take your chances on the exterior grounds. Supported in 10v10, the new Ground Mission mode, and Attack of the Undead.

Prepare for insane battles in Cranked: Confirmed, a mix of Cranked and Kill Confirmed. Enter the cranked state for a combat boost and keep the timer from running out by getting eliminations or collecting dog tags.

Get a speed boost with Gung-Ho, a new green perk that lets you hip-fire, throw grenades, and reload while sprinting. In Battle Royale, the new Time Traveler class can Glitch back in time, in addition to boasting a high resistance to explosives.

The battle lines are drawn, and a critical naval battle is impending. Choose your side: Ghosts or the Federation. Bombard your enemies as you race to capture territory and earn rewards for completing various daily tasks. The faction with the most map nodes at the end of the event wins.