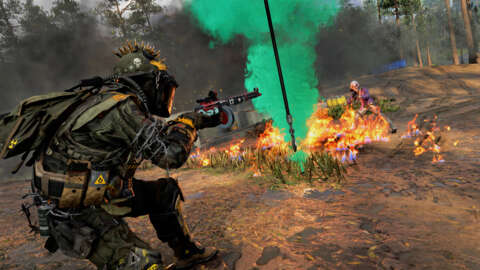 Another week brings more modes and playlist changes to Black Ops Cold War, as we continue Call of Duty’s ’80s Action Hero event. Today’s May 27 patch notes include a playlist refresher, the introduction of Rambo’s Gun Game, a double XP event, and a free access weekend.

Today’s update adds a Rambo twist to the Gun Game party mode. Explosive weapons like the Combat Bow, Death Machine, War Machine, and the RPG-7 are now part of the weapon cycle. Thankfully, everyone gets a Stimshot to increase their odds of survival against such powerful weapons. As usual, dying by melee in Gun Game drops you back one stage in the weapon rotation, and the match ends once the first player gets a ranged kill with the ballistic knife.

Additionally for the playlist updates, Snipers Only moshpit returns, and 3v3 Gunfight makes its Cold War debut. Prop Hunt is also being showcased in the Featured playlist hub, while standard Gun Game and Sticks and Stones can be found under the Quick Play tab.

You can see the full May 27 patch notes for Black Ops Cold War below, as shared by Treyarch.

Warzone also received a weekly update for May 27 with new weapon balancing, and there was a nerf to the Bertha cargo trucks in solo matches.