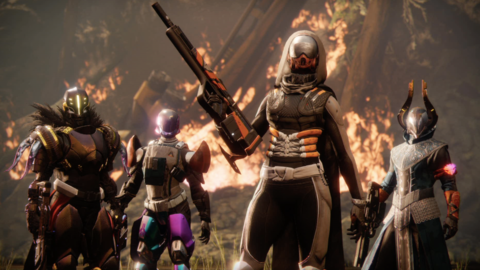 Destiny has been no stranger to exploitative glitches in its history, but its latest one might catch you in hot water should you choose to try and pull it off. Developer Bungie is scrambling to fix an exploit that Destiny 2 PC players can pull off easily, and warning those who attempt it that they could get banned.

The exploit, named the min/max glitch, has been around in Destiny 2 on PC for some time. It surfaced over the weekend when a player from a group that discovered it, named JB3, posted a video detailing how anyone could pull it off. Another member from the same group says that this was done in retaliation for JB3’s ban from Destiny 2 for using the exploit, and that the rest of the group doesn’t agree with it being public knowledge.

The Min/Max Glitch
– 15 orbs from Bubble and Well
– 7 orbs from EVERY super kill
– 5 minute long Bubble or Well
– Infinite Atheon Damage phase
– Infinite…most everything with a timer
– Built-in “netlimiter” in the game itself. https://t.co/zezATw3vYd

The short of it is this: on PC you’re able to play Destiny 2 in windowed mode, which then allows you to press and hold the minimize window button on the application. If you hold this down for a few seconds, release, and the hold again, you trigger a frame rate issue in-game that can cause some issues with numerous abilities in PvP. For example, the correct timing can lengthen cooldowns for opponents on some abilities, or results in a plethora of orbs spawning which can quickly replenish your super. As you might expect, Bungie is looking to fix this as soon as possible, but says that it won’t be patched out until an update in December.

Until then, Bungie is warning players to stay away from the exploit or risk “escalating restrictions” to the game. Bungie community manager dmg04 explained on Twitter that the team is kicking players who attempt the exploit from games with the “rutabaga” error message, and then monitoring how many times an account is triggering that error. Too many times in a short space of time, and you could face a permanent ban. As you might expect, occurrences or this error have skyrocketed since the video was published, with Bungie tweeting out confirmation that it was monitoring the issue.

Note: If players error out of the game numerous times, they can be met with escalating restrictions. So, aside from recommending you don’t negatively impact the experience of others by reproducing this issue, I also recommend not ruining your own.
Happy Sunday, and much love.

It’s been a challenging month for Bungie and Destiny 2, with the developer announcing that dungeons would cost extra after the launch of The Witch Queen expansion next year. A decision which has not been met kindly by fans of the game, but one that might actually be hiding the real issue with the game’s monetization.

Get A Free Destiny Lore Ebook From Bungie Store