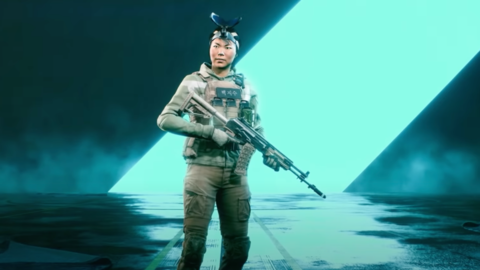 DICE has revealed the final five Specialist characters that will be featured in Battlefield 2042 at launch. These five join the five previously announced Specialists that were featured in the beta, bringing the total to 10 at launch (with more to come following release).

Specialist characters represent a big change for the Battlefield series, which has in the past featured character classes but not distinct characters like it has with Battlefield 2042.

Navin Rao is one of the newly confirmed Specialists. This Recon class soldier whose trait is called Trojan Network–this reveals enemies around them after killing a hacked target. The character also has a Cyber Warfare Suit ability that can hack into enemy and environmental equipment. Then there is Santiago “Dozer” Espinoza, who is an Assault class character that wields a ballistic shield and can survive blasts better than others. Emma “Sundance” Rosier, meanwhile, is another Assault class character. Rosier can fly with a wingsuit and has a variety of “smart” explosives.

Another new character is Ji-Soo Paik, who is a Recon soldier who can detect nearby enemies and use a scanner to reveal the locations of hostiles in cover. Finally, Constantin “Angel” Anghel is a Support class character who can heal teammates faster than normal and drop loadout crates containing armor and ammo for teammates.

Check out the video above to see these new Specialists in action.

In a blog post, DICE acknowledged the concerns of fans from the recent beta that Specialist characters were negatively impacting the ability of people to play as a team. Part of what might have caused players to think this, DICE said, is that Battlefield 2042’s UI in the beta did not do a good enough job to identify friend and foe, while the game’s ping system and team communication features were missing as well, though they will be ready for launch.

After a delay, Battlefield 2042 will be released on November 19 for PS4, Xbox One, and PC, as well as Xbox Series X|S and PlayStation 5. The game is multiplayer-only, compromising three main modes–All-Out Warfare, Portal, and Hazard Zone.