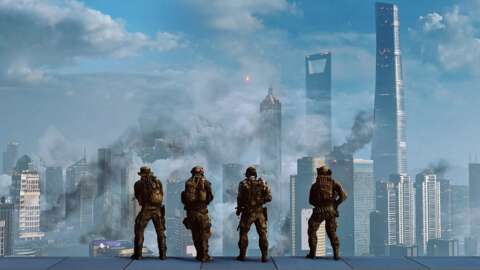 The Battlefield franchise has always been at home on PCs rather than consoles, and that isn’t changing with Battlefield 2042. When the game launches in just a couple of weeks, PC players who have the right hardware in their gaming rigs will be able to run the game with some of Nvidia’s choice gaming features including DLSS, Nvidia Reflex, and some light ray tracing.

DLSS, Nvidia’s AI upscaling technique, is why a majority of ray tracing compatible games can run at a 4K resolution at the same time. For Battlefield 2042 players, the feature’s inclusion should mean a clearer picture of the battlefield, and all the enemies in it. That being said, players won’t necessarily need to turn on DLSS to run Battlefield 2042 at 4K even with the game’s ray tracing options enabled.

On PC, Battlefield 2042 doesn’t have full-on ray tracing like what players would find in Doom Eternal or Metro: Exodus. Instead of a full suite of ray tracing effects, Battlefield 2042 will only have ray traced ambient occlusion. In plain English, that means the game will have more realistic shadows, which players may not notice too often in-game. Considering the comparison that Nvidia offered in a blog post on its site, the difference between turning this setting on and off is, while noticeable, not truly game-changing.

If PC players want to access these features they’ll need to download Nvidia’s latest Game Ready Driver update. Currently, a driver update is available that will optimize the game during its early access period, while another will launch before Battlefield 2042 properly releases on November 19.

When Battlefield 2042 arrives on November 12 in early access, players will have access to the game’s first group of 10 Specialists. These unique fighters each have their own special abilities, giving players new ways to approach the battlefield. For anyone curious about which specialist might suit their needs we have a breakdown of all 10.