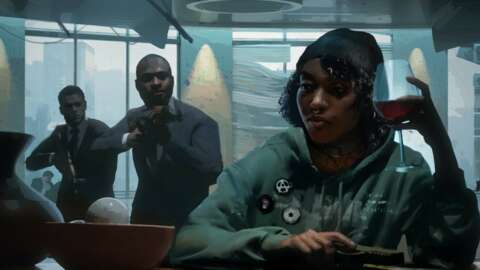 Battlefield 2042 will usher in a new era of warfare when it releases next month, and with it will come the franchise’s first non-binary character, Emma “Sundance” Rosier.

Yep. Sundance is non-binary and uses the Pronouns They/Them.

Sundance is one of 10 unique Specialists in Battlefield 2042, which each come with their own special traits and abilities. Hailing from France, Sundance is an Assault-type Specialist and comes equipped with a handy wingsuit for quickly navigating the battlefield, alongside the ability to use smart explosives that track targets.

Say hello to… Sundance
Another Assault Specialist on the way with Sundance, get used to seeing them zip through the sky on their Wingsuit for fast entry on objectives and tactical situations. They also feature a set of Smart Explosives that allow you to take out enemy aircraft pic.twitter.com/L9WFs9ODAd

EA recently revealed the remaining five Specialists players will be able to use in Battlefield 2042 at launch, with characters like the technology hacking Navin Rao from India, the shield-using Dozer from Mexico, the threat-assessing Ji-Soo Paik from South Korea, and the healing-focused Angel from Romania.

A recent open beta for Battlefield 2042 saw fans complaining about the new Specialist system, with the main argument being that it doesn’t seem to be a great replacement for the franchise’s more traditional classes. The beta also suffered from numerous technical issues and bugs that had players frustrated. DICE has responded to many of those criticisms, citing the ways the game will be improved in time for launch in a detailed blog post.

Battlefield 2042 releases November 19. Those who preorder the gold or ultimate editions of the game will be able to start playing a week early on November 12.