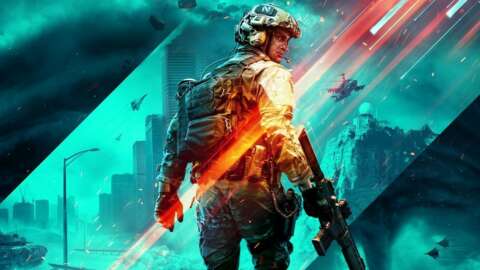 Battlefield 2042’s official release is fast approaching, but one player has reportedly already been playing the full game.

Though they didn’t elaborate exactly on how, Reddit user Aaronfrogger said they were able to access the full version of Battlefield 2042 after pre-loading the game on Xbox. Aaaronfrogger has gone on to make multiple posts on the Battlefield 2042 subreddit sharing all kinds of new looks at the game, ranging from glimpses of the game’s menus, a new look at weapon customization, and screenshots of bot matches.

More than a few players on the game’s subreddit seem displeased with the total number of weapons launching with Battlefield 2042, as revealed in a screenshot posted by Aaronfrogger. The image shows the full game will reportedly have three secondaries, four SMGs, four assault rifles, two LMGs, three DMRs, three shotguns, and three sniper rifles. That would make for a grand total of 22 weapons at launch, if the alleged screenshot is the real deal.

However, the above number doesn’t count all the additional weapons usable in Battlefield 2042’s Portal mode. That mode, which includes weapons (along with maps, gadgets, and vehicles) from Battlefield 1942, Battlefield 3, and Battlefield Bad Company 2, offers a highly customizable experience where players can combine elements from multiple Battlefield titles.

Battlefield 2042 launches on November 19, but players who preorder the Gold or Ultimate editions of the game can start playing a week early on November 12. Additionally, Xbox Game Pass Ultimate subscribers and EA Play subscribers will be able to enjoy a 10-hour free trial starting November 12.