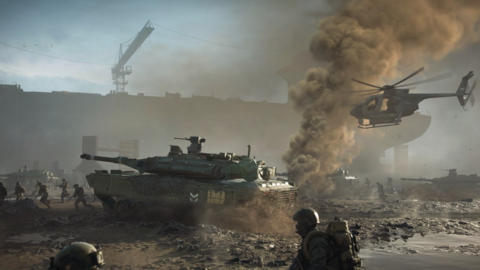 Battlefield 2042’s beta is available now for EA Play and preorder customers, and plenty of people have reported a variety of bugs and other issues with it. Part of that comes down to the fact that the beta represents the game in a months-old state.

The nature of game development means that beta clients are often well behind where the game is at currently with the developers, and this is also true for Battlefield 2042.

“Our open beta is now a few months old,” Battlefield’s community manager said on Twitter. Players can expect to see improvements, changes, and enhancements to Battlefield 2042 at launch. “Pardon our dust,” the developer said.

DICE also published a list of known issues with the Battlefield 2042 open beta, some of which have already been fixed for the full game’s release in November.

For the graphics and performance specifically, DICE said “many” of the issues players are experiencing have “already received a great deal of new attention” with the developers, and this work will continue up to launch in November. “Enjoy the experience you can have with our gameplay, and take confidence that there’s more to show you on 2042, and natural optimizations that are made to raise performance above our high standards in these final weeks heading to launch,” DICE said.

The list of known issues also touches on the PS5’s adaptive triggers. The beta does not include the “full range of supporting functionality” for this, and the full game might not either. This is being tested for “possible inclusion” down the track, DICE said.

You can see the full list of known issues for the Battlefield 2042 beta below.

In other news, some digital stores don’t do a great job at informing you which version of Battlefield 2042’s beta is available, so be sure to double check you’re downloading the right one. The Battlefield 2042 beta opens for everyone on October 8.