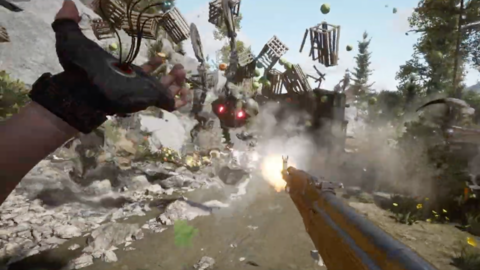 Developer Mundfish’s first-person shooter Atomic Heart got a new trailer during Xbox-Bethesda’s E3 2021 presentation, which didn’t reveal a release date but confirmed the game will be available day-one on Xbox Game Pass.

The new trailer showcased some of the powers and weapons players can experiment with. This includes firing electricity from your fingertips and levitating everything around you, as well as equipping yourself with guns like pistols and some spiked nail gun… or something. Check it out below.

There are also some bits of melee combat. Just based on the brief glimpse of gameplay above, Atomic Heart seems like riff on BioShock and Dying Light.

No release date for Atomic Heart was announced, but the latest trailer revealed that it will be available via Xbox Cloud Gaming and Game Pass.

Not much else is known about Atomic Heart. However, when a next-gen gameplay trailer dropped nearly a year ago, it was revealed that Doom composer Mick Gordon was also involved with the project.