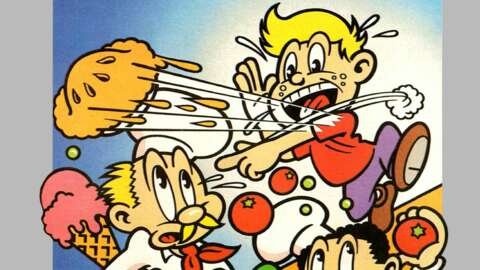 Food Fight, first released in 1983 as an arcade machine and later released for the Atari 7800, is getting a modern, multiplayer reimagining. Scheduled to launch early next year and sporting modern 3D visuals, the game comes from Mega Cat Studios and can be played single-player or co-op, with support for online multiplayer.

The game will be a timed exclusive for Atari’s new VCS console, and will release for PC, Nintendo Switch, Xbox, and PlayStation platforms at a later date. Atari says the VCS version of the game will contain content exclusive to that platform, but did not offer details on what exactly that exclusive content will be.

Mega Cat Studios’ Food Fight will feature procedurally generated environments and updated gameplay mechanics as players use up to 30 different items to defeat the competition in food-based battles, with different types of food sporting unique attributes, such as “slippery” or “sticky,” that will affect gameplay. Atari says more details on the game will be released in the coming months, but that Food Fight is the first example of its new “refocus” on premium PC and console games.

Atari’s VCS console released in June at $300 for the Onyx base model. Another VCS model, which includes an additional controller and sports a wood grain finish, retails for $400. The machine has been billed as a console/PC hybrid and comes with a large collection of classic Atari games preinstalled. It also supports a number of entertainment apps like YouTube and Netflix.