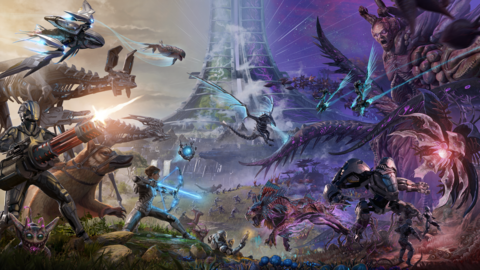 Ark: Survival Evolved’s newest expansion, Genesis Part 2, will now be launching on all platforms simultaneously on June 3, one day after it was supposed to launch. The delay comes from the game’s official Twitter account, stating that the game is in the certification process and is expected to be completed early in the morning. The expansion will launch at 5 AM PT/8 AM ET on June 3 across all platforms.

Genesis Part 2 is currently finishing the automated certification process.
We expect that process to be complete in the early morning, so we’ll be launching simultaneously on all platforms at 8 AM Eastern June 3rd.
Thank you for your patience and support. It will be worth it!

Genesis Part 2 is the final expansion for Ark, as the developers look to move forward with development on the sequel Ark 2, which features Vin Diesel. Genesis Part 2 was originally announced in November of last year with a release window of March 2021 but has since been delayed multiple times. While the latest delay was only for a day, it came very last minute, since Studio Wildcard announced it on what was supposed to be launch day for the expansion.

Genesis Part 2 has been described as the biggest expansion to Ark since its launch, featuring new voice work from David Tennant (Doctor Who) and Madeleine Madden (The Wheel of Time) playing Sir Edmund Rockwell and the AI companion Helena Walker respectively. It also features a ton of new items and mechanics, like the Egg Incubation Device and the Exo-mek.

Ark: Survival Evolved’s Genesis Part 2 expansion will be available on Xbox One, Xbox Series X|S, PS4, PS5, Steam, and the Epic Games Store on June 3 at 8 AM ET.