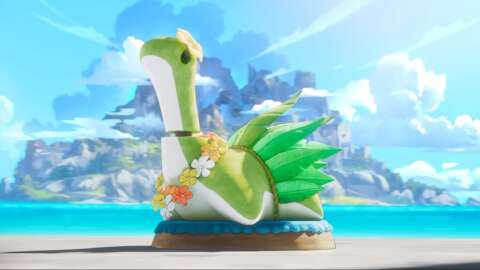 Apex Legends’ Season 11 is kicking off soon, and players will have a new massive map to duke it out on. The upcoming season will add Storm Point to the game’s rotating selection of maps, taking the title of “biggest map” from World’s Edge.

According to Rodney Reece, Apex Legends developer Respawn’s principal level designer, Storm Point is “larger [than World’s Edge] when you measure end to end. A look at the map was also shared by Reece, revealing a solid number of waterways cutting off the northern part of the map from its southern half, which is full of islands both large and small. Players won’t have to worry about drowning in any of those waterways though, as a majority of the map’s water can be walked across.

That 15% is playable space. Measuring maps end to end isn’t the most accurate way to judge a map’s size since it doesn’t account for negative space. It’s better to look at the playable real estate.
That all said, SP is also larger when you measure end to end.

The new map, characterized by its futuristic tropical setting, will also come with a new feature. Its reveal trailer showed that the area is populated by some pretty aggressive wildlife, including giant spiders and matching lizards. These creatures will also be present in the map during gameplay, presenting players with an additional threat. However, they’ll have to be careful when they engage with any of these creatures, as any gunfire can easily attract other players.

Apex Legends’ Season 11, Escape, is set to launch on November 2. Along with Storm Point, the update will introduce a new character to the game, Ash, as well as a new weapon, the C.A.R. SMG.