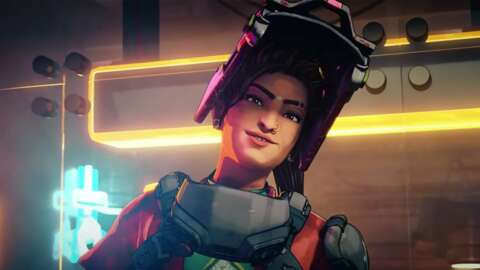 Rampart will be opening up shop near Lava City in the battle royale map World’s Edge. This new location will feature a custom shop players can use to acquire weapons from vending machines, and even has a paintball course out front that should make a great place for firefights as teams converge on the location.

The event isn’t limited to battle royale. Rampart will be making some changes to the game’s Arenas mode, where she will offer higher tier, discounted weapons over the course of the event.

It wouldn’t be an Apex Legends event without limited-time skins, and there’s plenty of that too. Players can acquire a brand-new heirloom wrench for Rampart that also serves as a gumball dispenser, as well as new rare and legendary skins for characters Wraith, Octane, Pathfinder, Fuse, Bangalore, and Lifeline that show what the game’s legends may look like if they had a more futuristic twist.

The event will arrive alongside balance changes to several legends, including Rampart, as well as various weapon updates and the removal of the controversial tap-strafe mechanic. Developer Respawn recently announced on Twitter the game’s next update would be removing tap-strafing. In the patch notes for the upcoming event, Respawn explains that the move’s inaccessibility, as well as its lack of readability and meaningful ways to counter it, made the developer choose to remove the unintentional gameplay mechanic.

Apex Legends Season 11 Start Date, Time, And What To Expect

Apex Legends Monsters Within 2021: Skins And Everything To Know About The Halloween Event