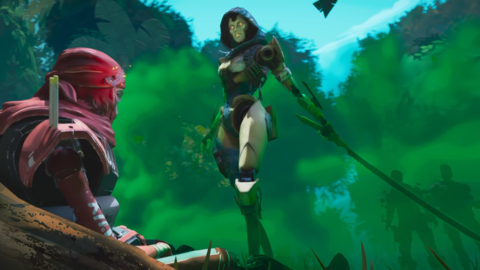 Dr. Ashleigh “Ash” Reid is coming to Apex Legends as a playable character, transitioning from solely being the Arenas’ announcer to a new legend in Season 11: Escape. Ash is a hit-and-run specialist, and her ultimate ability may forge a substantial synergy with Revenant’s ultimate ability, making the game’s two simulacrums into a strong power couple.

Ash’s sword and ability kit take influences from Titanfall 2’s Titans, notably Northstar and Ronin. The latter provides the basis for Ash’s ultimate ability, Phase Breach, which operates similarly to the Ronin’s Phase Dash. With Phase Breach, Ash opens up a one-way portal to a targeted location, allowing her and her allies to quickly teleport into the thick of combat, surprising enemies.

Now Playing: Apex Legends: Escape – Everything To Know About Season 11

It’s a risky move. The sound made exiting a Phase Breach is pretty loud, giving opponents a heads up that an Ash is moving on their position, and as a one-way portal, it’s not like Wraith’s Dimensional Rift–it doesn’t provide an option to retreat if things go south. It’s an all-or-nothing push.

Or at least it is unless you have a Revenant on the squad.

Revenant’s ultimate ability, Death Totem, allows the simulacrum to place a totem that, when interacted with, transforms him and his allies into shadows. As a shadow, you don’t take shield damage and when you’re killed, you return to the totem at half health but with your shield still intact. It allows a squad to aggressively push onto opponents without fear of being killed. And once you’re back at the totem, you can take the time to heal before pushing again.

The major downside to Death Totem is that the totem can be destroyed, so you ideally want to place it away from the fight or risk its discovery–if broken, all shadows return to their normal forms, now weakened and potentially in the midst of a firefight. But place it too far away and you waste valuable time having to run from the totem to the squad(s) you want to attack. The totem’s effects only last for a limited time.

Players have tried to alleviate this drawback with legends that possess movement-based abilities. Wraith’s Dimensional Rift, Pathfinder’s Zipline Gun, Octane’s Jump Pad, and Valkyrie’s Skyward Dive can all be used to move across the map more quickly. The problem is that the first two abilities are two-way paths, providing an easy way for enemies to follow you back to the totem before you have a chance to heal and push again. And the latter two are only really effective while outdoors since they both send a player skyward.

Ash’s Phase Breach has none of those weaknesses. When used after your squad has interacted with Death Totem, it can allow your squad of shadows to teleport right into the thick of battle. And if you’re defeated and returned to the totem, there is no easy way for an enemy to follow, since the Phase Breach is one-way. Death Totem alleviates the weaknesses of Phase Breach in turn, as teleporting back to the totem through death is an out if your fight goes south after the initial push.

So yeah, Phase Breach looks like it covers for Death Totem’s drawbacks and I imagine Death Totem does the same for Phase Breach. Add in the fact that Ash and Revenant together can quickly disorient enemies and prevent them from easily escaping–their tactical abilities tether enemies in place (Ash’s Arc Snare) and cancel out enemies’ abilities (Revenant’s Silence)–and you have a potentially terrifying power couple. When Season 11 launches on November 2, I foresee quite a few squads running with the two simulacrum side-by-side for optimal aggression and hit-and-run tactics.