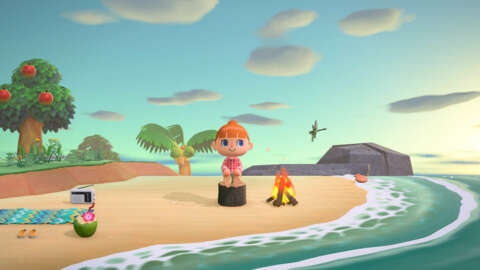 Given enough time, Animal Crossing: New Horizons’ players can bring any scene to their island paradise. Case in point, a player has recreated the opening scene from The Legend of Zelda: Link’s Awakening in New Horizons by using some clever building techniques and custom patterns.

The player, who goes by ACNH_barkenos on Twitter, managed to remake Marin and Tarin’s house in Mabe Village from Link’s Awakening, although not as it originally appeared. Instead, this Animal Crossing version of the cozy cottage closer resembles its appearance in the recently released remaster of Link’s Awakening, which stylizes the world of Hyrule with a clay aesthetic.

In all, the resemblance is uncanny, with the player recreating almost everything in the scene one-to-one, including the odd insects and animals players can find. While it’s not clear what has been put in place of the fox players can find in the game, the butterfly fluttering around has a replica stand-in, and there’s somehow a chicken in the yard. And as a clever replacement for Link’s Hylian Shield, it looks like a custom design was painted onto an umbrella.

Sadly, players won’t be able to visit this island in Animal Crossing: New Horizons any time soon, with the creator saying it was a “one off build.”

That being said, New Horizons players still have a good reason to get excited. Nintendo’s Animal Crossing direct is set to air tomorrow, October 15, at 7 AM PT / 10 AM ET. The event will exclusively go over new content coming to the game this November, including The Roost, a 24/7 coffee shop run by Brewster.