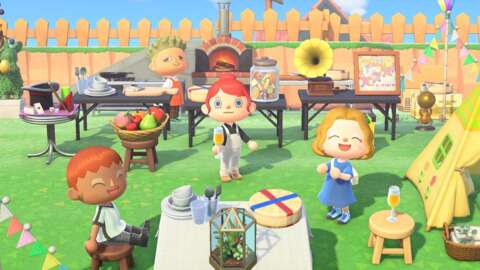 Once a year, crowds gather at the top of the dangerously steep Cooper’s Hill, near Gloucester in England, for a chance at immortality: chasing after a wheel of cheese and seeing who can make it to the bottom first. Or the least-maimed. If you’ve ever yearned to get your hands on the finest Gloucester cheese without having to worry about breaking a few bones in the process, the good news is that the dairy product is now available in Animal Crossing: New Horizons.

“Do you love cheese enough to chase a wheel of Double Gloucester down a hill at 60 miles per hour? Many folks in Europe do! It’s all fun and games until someone gets curd,” Nintendo’s description for the Cheese Rolling event reads.

Hello! Did you know that there’s a silly event in England where folks roll a wheel of cheese down a hill and then chase after it? Why didn’t anyone tell me?! Anyway, Nook’s Cranny is selling the famous cheese used in the event now through the end of the month. The chase is on! pic.twitter.com/E5viYUM3mc

You’ll be able to pick up the limited-time Double Gloucester Cheese item from the Special Goods section of Nook Shopping for 1,200 Bells until May 31, although you won’t be able to roll it down a hill inside the game.

The cheese itself looks like an authentic replica of the fabled sporting delicacy and even features the trademark red and blue ribbons that are used to give the real item its distinctive flair. If you’d like to know more about the mad annual event and just what it takes to mentally prepare yourself to risk life and limb dashing down the steep incline of Cooper’s Hill, Netflix’s We Are the Champions documentary series has an episode dedicated to The Cooper’s Hill Cheese-Rolling and Wake event.

Other Animal Crossing events that you can take part in right now include the Museum stamp rally until May 31, while June will let you take wedding photos for Reese and Cyrus all month long at Harv’s Island and you’ll be able to purchase wedding-themed items from both Nook Shopping and the Able Sisters’ shop.

Animal Crossing: New Horizons has been one of Nintendo’s biggest hits since it launched just over a year ago, and is now the second best-selling game on the Nintendo Switch console.