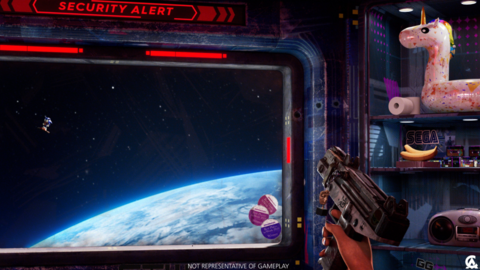 UK developer Creative Assembly is working on a new sci-fi shooter, and now the studio has teased the project even more. In a social media post to encourage people to apply to work on it, the studio teased that it is making “something radically different” in the FPS space.

“If, like us, you want to offer players an experience that feels fresh, fun, and exciting, check out our job openings,” the developer said (via VGC). In addition to those teasing words, Creative Assembly attached an image that seemingly contains references to Sega franchises.

Creative Assembly is owned by Sega, and perhaps the most obvious and apparent tease is the banana–this is potentially a reference to the Super Monkey Ball series. The cassette tapes might be a nod toward Jet Set Radio. There are likely other clues to be gleaned from the image, so give it a close look and let us know what you see.

Creative Assembly has 45 open positions listed on its careers page across a variety of disciplines, some of which are specifically for a new sci-fi FPS.

This teaser comes not long after Sega announced its plan to make a “Super Game,” which will be a new FPS from a European studio. Creative Assembly fits that description, but we don’t know for sure yet what the Super Game might be. Sega has said it will take as long as five years to create this game, so we likely won’t be playing it anytime soon.

Creative Assembly’s next game is Total War: Warhammer III, which is slated for release this year. The studio hasn’t made a first-person game since 2014’s Alien: Isolation.