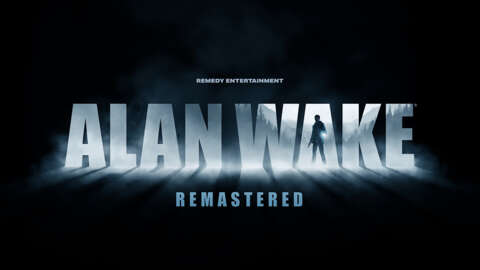 Alan Wake Remastered, a refreshed 4K version of the 2010 game and its two expansions, is on the way from Epic Games. The remaster will launch this fall on PC via the Epic Games Store, PS4, PS5, Xbox One, and Xbox Series X|S.

The remaster will include the core 2010 game, plus The Signal and The Writer DLC, along with a new commentary track from creative director Sam Lake. This also marks the first time the game will be available for PlayStation owners–it was previously exclusive to Xbox 360 and PC.

Alan Wake centers on the titular horror writer as he searches for his missing wife across the Pacific Northwest town of Bright Falls. The third-person shooter pairs your standard weapons with a flashlight, which you have to use to weaken the supernatural monsters by shining lights on them. It was inspired by mystery and thriller series such as Lost and Twin Peaks, and the works of Stephen King. It received a follow-up, the more arcade-like, combat-focused Alan Wake’s American Nightmare, in 2012.

A remaster of Alan Wake is kind of a big deal for developer Remedy Entertainment, particularly right now. First, the game became something of a cult hit when it was released on Xbox 360, taking Remedy away from its more action-focused roots with Max Payne into the realm of a psychological thriller. But Remedy made the game as an Xbox exclusive, and for quite a few years, Microsoft owned the publishing rights to the property–so an Alan Wake 2 never materialized, and Alan’s story was never fully resolved.

Remedy acquired the Alan Wake rights from Microsoft in 2019, the same year it released action title Control–a game that proved to be a big hit for the studio. Control had its distant origins as another Alan Wake follow-up and carries similar paranormal themes. The game imagines a government agency that investigates and secures supernatural events, objects, and people, which you uncover as its new supernaturally powerful director, Jesse Faden. When Control was released, it included hidden Easter eggs that suggested connections to Alan Wake’s unfinished story, but Control’s final story DLC, named AWE, made the connection explicit. Control and Alan Wake exist in the same universe, and what’s more, the stories are intricately connected. Whatever comes next for Control, it seems it’ll include whatever’s next for Alan Wake.

So returning to Alan Wake at this moment, as Remedy works on whatever’s next for these two big properties, seems pretty pointed. Remedy has already said its next game is in the shared Control-Alan Wake universe. This feels like it could be providing fans with a refresher course on what happened in Alan Wake, so they’re ready for Remedy’s next big offering–which suggests it might be soon that we start to hear about what’s next for Alan and Jesse. Alan Wake Remastered also includes a new commentary track from Sam Lake, which might include some further insights about how Remedy means to bridge the two stories even further.

Even if Alan Wake Remastered doesn’t shine more light on the future for the series, though, this should be an excellent opportunity to revisit Remedy’s cult classic. The original title still holds up pretty well even a decade later, but having access to it on new consoles and with improved graphics should allow Alan Wake to scare a whole new batch of players.

When Does Alan Wake Remastered Unlock?