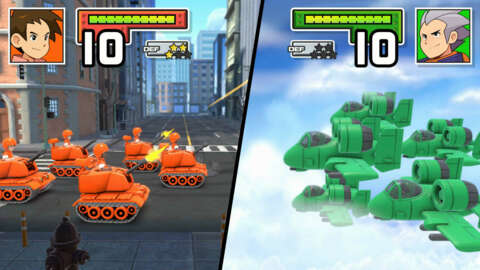 The Advance Wars series is coming to Nintendo Switch later this year. Advance Wars 1+2: Re-Boot Camp releases on the hybrid console on December 3, and it’s a remake of the first two classic Advance Wars titles for Game Boy Advance.

Nintendo says that both Advance Wars games have been “reimagined and rebuilt from the ground up” for Switch, featuring enhanced graphics and controls. The game also features the full campaigns from both titles as well as a local Versus mode for up to four players.

The first Advance Wars game released for the Game Boy Advance in 2001, although the series dates back to the Famicom. Advance Wars 2: Black Hole Rising followed in 2003. Both games received critical acclaim at the time of their release and are widely considered among the best games for Game Boy Advance.

Advance Wars: 1+2 Re-Boot Camp launches exclusively for Switch on December 3. The game retails for $60 USD and is available to preorder now on the Nintendo eShop.

That certainly wasn’t the only surprise reveal during the Direct. Nintendo also showed off a brand-new 2D Metroid game for Switch, Metroid Dread, as well as more footage of the upcoming Legend of Zelda: Breath of the Wild sequel. You can catch up on all the biggest news from the Nintendo Direct in our roundup.