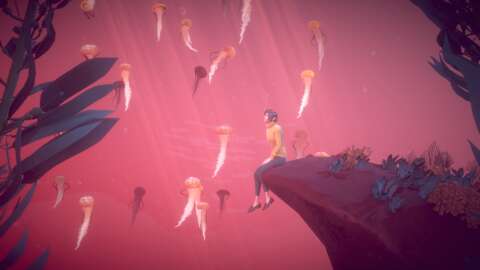 A new trailer for A Memoir Blue debuted during the Annapurna Interactive Showcase, showcasing a beautiful-looking atmospheric game that mixes together 3D animation and hand-drawn 2D art. The trailer noticeably doesn’t feature any words, and creative director Shelley Chen says that’s true for the full game.

“There’s no words in there, like zero words are spoken by the character, zero narration,” Chen told GameSpot. “We decided to have the character animation do all the communicating. Back in the old days, people didn’t need words to watch movies. They can get a joke, they can get at the emotion of the characters. So that pumped me to do it this way, because I don’t really play many games. I watch more movies than play games.”

Instead, A Memoir Blue’s story of champion swimmer Miriam, who begins to think back on her childhood memories with her mother, is primarily told through the character’s body language, which can be captured in different ways depending on whether the character is a 2D or 3D model. And as a big fan of Disney movies, Chen also sought to use music to tell A Memoir Blue’s story.

“[Sound FX Ray Gould] did a really, really great job on the background music,” Chen said. “We worked really hard on it. He definitely had a hard time working with me, because I watched a lot of Disney classic movies and their background music always followed the movie scene, like the emotion is very strong in Disney’s soundtracks. So I told Gould that I wanted to have that element in our game since it was such an important part to communicate like how you should feel, what’s the character’s mood. I think the player is going to enjoy it a lot, the music of the game.”

This all comes together to create an experience that Chen likens to a more interactive book. “A Memoir Blue could be a book,” Chen said. “Every interaction is like flipping a page.”

Between all the talk about movies and books, I asked Chen if she saw A Memoir Blue as a puzzle game at all (the player primary interacts with the world and moves from scene to scene by completing small puzzles). And she doesn’t–instead, she describes A Memoir Blue as an “interactive story.”

“I wouldn’t say it’s a puzzle game,” Chen said. “When I give the elevator pitch I use ‘interactive story’ because back in IndieCade 2018, I was talking about the game and I couldn’t find a genre for this kind of game, so that’s why I call it an interactive story. It’s too easy to be a puzzle game. I feel like a puzzle needs to involve a lot of logic, a lot of thinking. But for our interactions, it’s more about your first thought, your intuitiveness–what do you think you should click on and what do you think you should interact with. In our puzzles, there are many, many, many, many different meanings behind them.”

And for Chen, she hopes folks discover their own meanings from A Memoir Blue’s story, just like the movies and books that she loves. “It’s a very, very simple story, so I’m not worried that the player won’t get it,” Chen said. “And even if they don’t get it, it’s okay. It’s completely okay, because when we look at movies, when we listen to a piece of music, when we look at artwork, we all have different points of view. When people see stuff, they all have different thoughts. That’s the point of taking out the words in A Memoir Blue, I want to encourage that to happen.”

A Memoir Blue currently doesn’t have a release date but it’s scheduled to launch for Xbox Series X|S, Xbox One, PS5, PS4, PC, Switch, and iOS. The game is coming to Xbox Game Pass as well.

How Journey Inspired The Musical Atmosphere Of A Memoir Blue